skip navigation
The Official Home of the Cedar Rapids RoughRiders 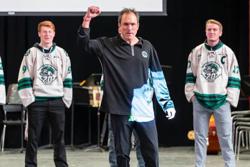 Carlson has had the honor of serving as head coach for Team USA during the 2008 and 2009 World Junior A Challenge. Both years, Team USA won the Gold Medal.  In 2009, Carlson was recognized as the United States Olympic Committee Development Coach of the Year.

Over 500 players who have skated for Carlson have received Division I scholarships, 41 have been selected in the National Hockey League Draft, 42 have signed NHL contracts, over 100 are developing in the minor leagues, and 28 have made their NHL debuts.

A native of Lawrenceville, New Jersey, Carlson graduated from the University of Massachusetts-Lowell with a B.S. in Business Administration and Marketing. While at Lowell, Carlson skated as a forward with the River Hawks. His on-ice talent was recognized before he arrived in Lowell and when he was selected in the 1987 National Hockey League draft by the Pittsburgh Penguins.

After graduating from UML, Carlson spent one season as an assistant coach at Lawrenceville School before returning to Lowell to serve as an assistant to head coach Bruce Crowder. After helping the River Hawks to a berth in the 1996 NCAA tournament, Carlson spent another three seasons beside Crowder as an assistant at Northeastern University in Boston, where he also acted as recruiting coordinator. He earned a master's degree in education from N.U.

Carlson and his wife Tammy currently live in Ely with sons Dustin and Brayton.